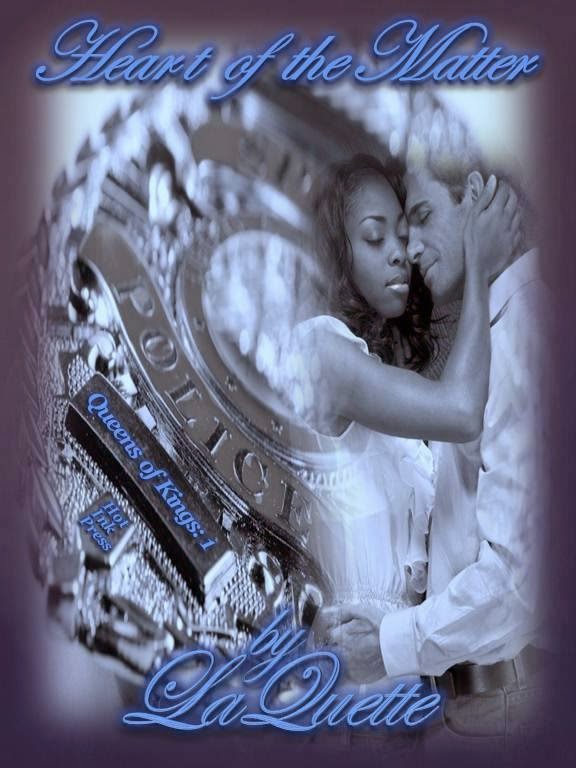 Heart “Mac” MacKenzie is a tough police lieutenant in the NYPD servicing the rough streets of Brooklyn, New York. She’s a strong leader who doesn’t mind getting in the trenches with the men and women she leads at the seventy-fourth precinct. Her house, her people, and her family—both blue and blood—are the only things that matter. She would live and die for the blue wall that shields her from a traumatic past.

When her captain assigns her a high-profile kidnapping case that she doesn’t want, and insists she allows the missing girl’s irritatingly sexy uncle to tag along during the investigation, her blood boils. Mac has no choice but to do what she always does when things get out of control, lay down the law—her law.

Kenneth Searlington is a rich playboy from the Upper East Side of Manhattan. With stunning looks and an unlimited source of wealth, he’s used to being the center of everyone’s attention, especially the women that he comes in contact with in high society. His life is fun and carefree until his niece, Merridith is kidnapped, and he’s forced to seek out the help of his godfather an NYPD police captain, David Porter.

Afraid and frustrated, Kenneth defers to his uncle’s expertise and his promise that he’s putting his best cop on the case, Lieutenant MacKenzie. When Kenneth discovers “Mac” is actually a sexy as sin lady cop with a fiery temper to match, he decides mixing a little business with pleasure might be just the thing he needs to distract him from long-standing family issues that are trying to crawl their way back into the forefront of his life.

Each used to having their own way, can these two work together long enough to bring an innocent child home? Or will they settle their differences and unyielding attraction in a more carnal way and get right down to the heart of the matter?

Excerpt:
Kenneth watched Heart climb the stairs two at a time. She went into what had now become their bedroom and headed straight for the walk-in closet. He heard the keypad beeps from the gun safe as she dialed in the combination code.
He felt a slight sense of relief. Heart was silent-angry. That was never a good thing. At least if she was this mad and her weapons were locked away, he stood a chance of surviving to see the next day.
She re-entered the bedroom and walked directly past him. He heard her quick footsteps run down the stairs. He followed, saw her head for the basement door, and disappear into the lower level of the house.
He walked downstairs to find her standing in the middle of the gym with her arms crossed against the expanse of her heaving chest.
“Baby, I…” She put up her hand and stopped his words. She turned toward the stereo, turned it on, and fiddled with the dials until he heard Maxwell’s “Bad Habit” pouring from the speakers.
It was late and she had the sound turned up on damn. Fortunately for their neighbors, the basement was soundproofed. When the house was built, the original owner had wanted a place in the house where he could make as much noise as he wanted without disturbing the neighbors. By the looks of it, Heart planned to benefit from that fact. He wasn’t quite sure if he was going to benefit from it or not yet.
“What’s with the music being so loud?” He yelled over the driving base.
“I want to make sure that the neighbors don’t hear you scream,” she said, face straight, muscles tightening in her arms as she squeezed her hands into tight fists.”
“Shit,” was all he could say. He knew he was in trouble now.
She rushed him…that was the only way to explain how she was standing across from him one moment, and sitting on top of him the next. In a matter of seconds he was on the floor; face up, with her sitting on top of him.
“Heart, this is not funny. Get up so we can talk.”
She didn’t move, didn’t even make a sound. She just looked at him, through him with sharp brown eyes cutting into his soul. His hands had somehow ended up near his head when he fell. He went to pull them down and felt resistance. He tried to move them again and heard a metal clinking sound above his head. He moved his head around until he could see the shiny glint of handcuffs. She’d cuffed him to the weight machine they’d landed in front of when she’d taken him to the floor. This was the very same weight machine that was bolted to the floor and immovable.
“Heart, this isn’t funny. What are you doing? Why did you cuff me?”
Her face was still tight with anger, her body stiff and poised for attack.
“Kenneth, do you know that I hate watching you get dressed. I hate it because I hate that anything else in this world gets to touch your beautiful alabaster skin as closely as I do. I want to be the only thing draped over you so intimately. Not the fine garments you wear, and certainly not that bitch, Faith.”
He watched her pull something from her back pocket. At first it looked like a heavy handle, but with a flick of her wrist, it became a knife.
“Heart?”
She ran the dull side of the knife across his lips and said, “Ssssh.”
He swallowed carefully as he watched her remove the knife from his lips and slice the sharp side down the length of his shirt, causing the two sides to peel away from his body like water.
She continued the slide of the blade through his pants until he was lying beneath her naked and at her mercy.
“I’m an only child, Kenneth. I never really learned how to share. I’ll be damned if I’m going to share you. So hear me now. If you want that bitch, be with that bitch, and leave me the fuck alone. But if here is where you want to be, keep that bitch, and any other out of your face. I. Don’t. Play. That. Shit.”
He nodded his head quickly. He knew he hadn’t perpetrated that kiss with Faith, but him lying naked beneath her while she had a sharp blade dancing between her fingers didn’t seem the most appropriate time to point out whose fault this entire fallout was.
She brought down the hand holding the knife with a hard and fast stabbing motion. He flinched, anticipating pain, but realized soon that there was no pain. She hadn’t stabbed him. He turned his head slightly to the side and saw the shiny blade next to him, sticking out of the floor.
Heart grabbed him by his chin and allowed one word to slip through her tightly ground jaw, “Mine!”
She slammed her mouth down on his and kissed him hard, sharp teeth biting into his flesh. His skin rent and he tasted the bitter metallic tang of blood. He should have been pissed, he really should have felt afraid, after all, this woman had rendered him helpless and brandished a weapon in front of him. He was shaking, his heart was pounding, and his breath was coming out in rapid tufts of air from his heaving chest. But surprisingly, there was no fear only…interest.
His dick jumped beneath her. He was handcuffed with a knife sticking out of the floor next to his head and he was so turned on his dick could cut granite.
What the fuck is wrong with me?

A native of Brooklyn, New York, LaQuette spends her time catering to her three distinct personalities: Wife, Mother, and Educator. Writing: her escape from everyday madness has always been a friend and comforter. She loves writing and devouring romance novels. Although she possesses a graduate degree in English Lit, she'd forego Shakespeare any day to read something hot, lusty, and romantic.