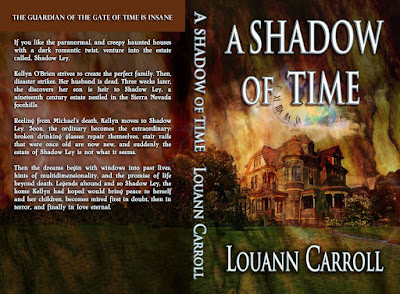 If you like the paranormal, and creepy haunted houses with a dark romantic twist, venture into the estate called, Shadow Ley.

Consumed by a childhood filled with terror and pain, Kellyn O’Brien strives to create the perfect family. Then, disaster strikes. Her husband is dead. Three weeks later, she discovers her son is heir to Shadow Ley, a nineteenth century estate located in the Sierra Nevada foothills.

Still reeling from Michael's death, Kellyn moves to Shadow Ley. Soon after her arrival, the ordinary becomes the extraordinary: broken drinking glasses repair themselves, stair rails that were once old are now new, and suddenly the estate of Shadow Ley is not what it seems.

She turns to the local historian and hears the tale of Shenahobet, the portal guardian, and the Hutto-pah, a tribe of Native Americans related to the Maya. She meets John, a physician who experiences visions of other times and places. Her dreams turn into nightmares with windows into hints of multidimensionality and the promise of life beyond death.

Legends abound and so Shadow Ley, the home Kellyn had hoped would bring peace to herself and her children, becomes mired first in doubt, then in terror, and finally in love eternal.

Excerpt from A Shadow of Time
“Shit,” Kellyn O’Brien complained as she negotiated another turn. The foothills of the Sierra Nevada Mountains had more than their share of winding roads. At the five-mile marker, she found the turn off to Reservation Road. A quick left, then a right, brought her to a wrought iron gate that barred her entrance. Shutting off the engine, she glanced back at Scott. Her two year-old son slept with a sippy cup clutched in his hand as if his life depended on it.
Getting out of the car, she approached a gate that stood at least six feet high and was topped with heavy spikes. Grabbing the rigid metal, she gave it a good shake. The lock held while rust-colored needles fell on top of her like rain. She glanced around, unnerved by thick pine trees and underbrush. It looked as if the gate hadn’t been opened in ages. All was dark gray and green, spider webs dancing in spiky boughs.
A razor-sharp wind picked up, blowing her scarf across her face. She whipped it away as she stumbled over a rock. Without notice, her stomach gave way to morning sickness that only occurred in the afternoon, and she retched painfully. Wiping her mouth with the back of her hand, she approached the Prelude where her newly awakened son babbled at an invisible presence in the back seat. Her heart sank as she realized he was up to his tricks with his imaginary friend, Man. She opened the driver’s side door and sat down.
Scott giggled. “Man!”
Covering her weariness, she glanced back at the empty seat next to him. “Man?”
“Yes. Nice man.”
“Very nice man.”
Kellyn’s hands shook as much from the cold as from exhaustion. Closing the car door, she peered out the window. The solicitors had promised her the gate would be unlocked for her arrival. She sighed. Trouble was something she had come to expect. Life had been challenging, first as an orphan, then as a foster child. She considered herself toughened, relished challenges, and met head-on whatever circumstances came her way. She thought herself emotionally strong, but the death of her husband and the strain of her pregnancy had stretched her resilience almost to the breaking point.
“Cain I hep ya?” a tobacco-thickened voice asked from outside the car.
Startled, she glanced up, instinctively clutching her purse as she rolled down the window. An elderly man stood before her dressed in filthy corduroy pants with a small, stained, gray T-shirt that read See the Grand Canyon Today! His coat was at least two sizes too large and hung on a skeletal frame. The old man scratched his beard then sucked on his teeth.
“You Kellyn?” he asked, sticking his head toward the opened car window.
She stared back at large canine-like yellow teeth, chipped and stained. “I’m Kellyn O’Brien. Are you Henry?”
He nodded and his glasses slipped down his nose. He pushed them up with a gnarled, blue-veined finger. “Sorry ’bout keeping ya out here. I was busy up at the house ’en just made it to the gate.”
“Can you let me in?” She wondered at his voice. For a moment, it had sounded odd—bereft of emotion and tinny. She laughed at herself. Fanciful thoughts for a pregnant woman, she mused.
Needles crunching underfoot, the air perfumed with pine, Henry muttered to himself as he fumbled in his pocket. He withdrew a thick iron key and unlocked the gate. It swung outward before coming into contact with a large pinecone.
“Widdamaker,” Henry said, puffing. Visibly distressed, he pulled the pinecone from between the gate and the dirt. His legs shook with the effort.
“What?” With her head poked out the window, she shivered in the cold, almost missing his last remark. Thick heavy clouds roiled overhead, threatening rain or snow.
“Widdamaker cone,” he yelled. His large fingers curled around the heavy seedpod as he walked toward the car. “No good for nothing, ’cept to hit ya on the head ’en knock ya out.”
Concerned, she clicked the shoulder harness into place and relocked the car door. Scotty opened his pudgy hands as she glanced at him in the rearview mirror.
“I see, Mommy?”
She shook her head, catching his eye. “No, Scott. It’s dirty.”
The old man continued, “You watch out for these things, missus. They can kill a grown man. Or woman.”

Louann Carroll is a Native Californian living in the Sierra Nevada foothills with her husband, Dennis.

Mother to three children, she is an avid rock, fossil, and gem hunter who enjoys sharing her finds with family and friends. She is a student of alternative religion, archaeology, anthropology and paleontology.

After leaving her position as C.E.O. in the Bay Area, she has pursued her writing career with much success. Winner of the 2010 Crescent Moon Press award for best novel, she has gone on to write several more works that can best be described as paranormal with a 'touch' of horror.

She is the author of Gemini Rising, book one, Gemini Rising, book two,
(recommended reads) The Light and the Flame, a Sci-Fi romance trilogy, A Shadow of Time, paranormal horror, Shadowlands, Leanore's story, Journeys, The Adventure of Leaf, Innocent Blood and The Foundlings, short lunchtime reads available on Amazon.
Links