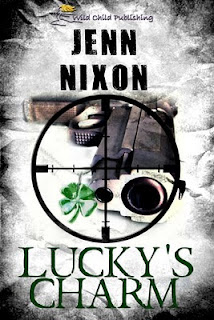 Teaser Tuesday continues with Chapter 1 of Lucky's Charm. I enjoyed writing this series so much. While it's not the traditional romance, Lucky and Kenji's love story is amazing and brutal and so very fun to watch evolve...when he eventually shows up. :-)

I hope you enjoy!!

Two days later, Lucky Fascino sat at the back of the plane, flipping through the complimentary magazine. She smiled up at the male flight attendant when he stopped the beverage cart.
“Drinks?” he asked.
“Gin and tonic, thanks,” she said.
“Make it two,” her neighbor added.
Her row mate, a pink-skinned, gray-haired man, had curiosity etched on his face. Next to Lucky, any Caucasian looked pale so she understood their interest. Being naturally bronzed, due in part to an unknown, mixed heredity, gave her an all-year color most women would kill to have. As part of her normally disguised travels, she hid her curly, honey-brown hair and slight almond-shaped, amber eyes—now considered exotic instead of strange—behind a jet-black wig and brown contacts.
Talking to a stranger was the last thing she wanted to do. Getting far away from the job was the only thing on her mind. She’d been in Vegas for nine days, watching the target, learning his habits, hangouts, and daily rituals. During the last five, she’d seen him with three women in two different motels.
Gotta love Vegas.
Afterward, she had worked off the adrenaline high from the job in the hotel gym, while waiting for news of the target’s death. It came in the form of a small article in the local newspaper. The city had well over a hundred murders so far this year. One more, under seedy circumstances, didn’t get much attention.
The man beside her tried to make conversation while she nursed her drink. Mundane chitchat mostly. I really don’t care where you live. It was natural for normal people to want some type of contact to ease the boring flight. Thanks to her second cocktail, she felt more social. Besides, she didn’t have a choice. He wouldn’t shut up.
“So, what do you do for a living?” Frank asked after the exchange of names and destinations.
Kill people like you. Well, she didn’t really kill people like him, unless he had some sordid history of crime. Unlike Andersen, who used his corporate success to embezzle, commit fraud, and murder, Frank seemed like just another guy.
“I’m the Comptroller for an international furniture company.” Lucky watched the man’s eyes glaze over when she described what she did for “work.” Accountant types never impressed anyone. During long jobs, she made up a personal history and itinerary to go along with whichever fake ID she used for cases like this. Today she played Lucille Summers from . It was one part of the job she still enjoyed.
“Sounds lucrative.” He rubbed the side of his gin-reddened face and covertly tried to ogle her legs. “In Vegas for business or pleasure?” The way he enunciated the latter made her skin crawl. She wouldn’t give him the time of day if he were the last man on the planet able to donate sperm to keep the species alive.
“Business meetings, you know how it goes, have to get those fiscal reports in order for the CFO,” she said, smiling, mostly to suppress the gag reflex.
He laughed, continually eyeballing her and gabbing about his trip. The trite, one-sided conversation continued until the plane began its descent.

The plane taxied off the runway toward the terminal as Lucky leisurely collected her things. Frank, already out of his seat, searched for his carry-on.
“Take care, Lucille.” After finding his luggage, he offered her a card. “If you ever need a contractor, give me a call.”
She put the card in her jacket pocket, cleaned the area with a Handi Wipe until it smelled like lemon, and waited until the crowd thinned out before deplaning. Having no checked luggage, Lucky walked right by and smirked. She spotted standing with the chauffeurs near the exit.
“What the hell are you doing here, you nut?” Lucky handed over the garment bag. “Here, make yourself useful.”
“How was the trip?” Bet took the bag and grinned.
“Ya know, same shit, different method, location, and target.” Bet never heard the details of her hits so she dodged the question.
Her sparkling green eyes rolled in response, short, bleached hair tossing backward. Lucky towered over her by half a foot, but no one commanded attention like Bet. The product of a white father and black mother, Bet was a kindred spirit who didn’t fit the norm. Lucky always considered her a curvy, punk-rock version of right down to the soft brown complexion. Shrugging off the eye-roll, Lucky secured the canvas bag against her hip. “Did your dad send you as a way of apologizing?”
“Well, he told me I owed you dinner so I figured we can grab something in town before we go home.” Bet shrugged.
“I should eat. Want to go to ?”
“If you get rid of that stupid wig.”