Writing a book is hard. Seriously. I learned the hard way.

There's a social media post going around about a reader who emailed an author to tell her that the .99c to $2.99 price she paid for her ebook was too much and she had to return it. While you will never be able to get rid of the freeloader and pirate mentality these days, maybe a little bit of an education on writing a book can go a long way to help some readers understand what it takes. It's not easy. I learned that the hard way.

I became an avid reader in my mid-Teens. Family members bought me some 90s version Nancy Drew books and I couldn't get enough. From there I started reading Star Trek: The Next Generation novels and mostly mysteries and suspense like Mary Higgins Clark and Iris Johansen.

I binge read both authors, as I had found them later in their writing career, and realized I was figuring out the end before I was halfway through the book.  So, that totally meant I could write a better mystery, considering I already had piles and piles of unfinished fanfiction, short stories, novel plots, video game ideas, and even plays. Right? Hahahahah

One day, way back in 1999 this little movie called Star Wars: The Phantom Menace came out and Jenn fell in love with young Obi-Wan and Qui-Gon. I saw that damn movie 15 times in the theater, had a padawan braid, and started reading the Jedi Apprentice books from Scholastic despite the fact I was a 25-year-old girl and the target audience was 12-year-old boys. (That's another story for another blog). If I remember correctly, a new book came out every month. They were short, but great stories, and I figured, hey, I should try to write one of these. 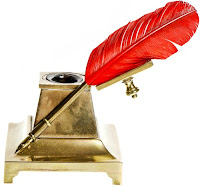 So, I wrote a Star Wars Fan Fic called Children of the Force. Pretty damn good story idea if you ask me.

Anyway, when I finished it and thought it was the best story ever, I decided to try my hand at an original story because I knew Scholastic wasn't going to take my story. That book was called Play Nice and Live to See Tomorrow. You see the Mary Higgins influence no doubt. Well, I thought Play Nice was awesome. All my friends LOVED it. My family LOVED it. After I published it with a vanity press and started to promote it on AOL I learned a very hard truth. It. Was. Horrible.

I figured I had read enough, did well enough in school, and wrote enough stories already that I knew what I was doing. Big mistake. Not only did people on AOL call me out for spam promoting (I was), they pointed out that my writing was terrible. They were right. I cried a little. Flew off the handle at some people online. Cried a little more.

However, I had a choice before me. A. Forget about writing and go on with my life. B. Keep writing, learn, get better, and try again.

I chose B.  I went back to college to get my degree. I joined a writers group.  I wrote my second book, another Mystery. I wrote a third book - a Harlequin style Romantic Suspense.

At my writer's group meetings and conferences, I learned the "rules" of writing. Showing vs. Telling, The difference between POVs and how they work, character development, plotting, the story arch, etc. I talked with bestselling authors and picked their brains for hours. I worked with critique partners. I worked with writer friends online. I worked and worked and worked on my craft (PS I'm STILL learning and hopefully improving) for ten years before I even attempted to sell another book.

During those years, however, I wrote both Tiva books and the first Lucky book. When I submitted them and got them accepted by a publisher (2 years later) were they great? No. Did they need lots of work? Yep. I think I probably learned more about the writing craft working with editors than anyone else. I paid very close attention to my bad habits: Fragments, Passive voice, comma splices, crutch words, and I taught myself how to spot at least half of them when I'm writing now, which really helps, let me tell ya!

much I had to review and change. It was pretty much a nightmare. However, each book and each editor taught me a new rule or a new approach or pointed out a bad habit and each time I learned something new it made me better.

I want to keep writing for as long as I am able. I want to be taken seriously regardless of the genre I write. I want to get better. I want to learn more.

I don't want to be one of these dino-porn writers who are simply trying to make a buck off readers by putting out crappy (even if parody) ebooks. In my opinion, they are clogging up the bestsellers lists so that people like me have a harder time finding an audience. I think it's wrong and shady. Obviously, people are buying these books but it just makes having a writing career much harder even if you do write well and put out a decent book.

Writing, for me, is well worth the hardships. I try not to complain but sometimes, when you see that reality star get a six figure contract or try to read the first page of the newest bestseller and you can't get passed the first paragraph because the author is breaking all the rules you've learned not to break, it can be tough.

Like any dream, it takes work. The good thing, these days, you can pretty much learn to do anything you want by going online, meeting like-minded people, and joining online communities. I'll keep writing. It's in my blood now and I'm glad you're along for the ride.

What dream are you working on? I'd love to hear about it!
Posted by Jenn Nixon