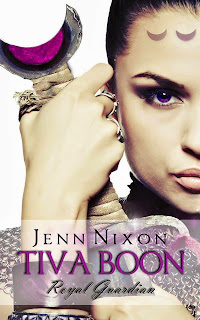 Book one of my epic Sci-Fi Fantasy series: Tiva Boon!

Exiled from her home and running for her life, Tiva seeks asylum with the Union, a universal security force, and attempts to put the past behind her. Finding herself alone among various space faring races, Tiva integrates herself into the strange society using her skills as a protector and befriends several aliens she meets along the way, ones who will change her life forever.
When a message from those loyal to her king reaches her months after she feels safe in her new life, Tiva’s destiny and the fate of her people collide.

The king held out his hand to Tiva. She turned to her father, who nodded, so she pressed her tiny palm against the king’s hand. He covered the top of her hand with his other and looked into her eyes. Instantly, she felt warmth and kindness from him. She smiled.

“I do not intimidate you, do I Tiva Boon?”

“No, sire,” she said, and put her free hand on top of the king’s. A smiled appeared on his lips as he looked up to Kevler.

“Most of the children I have met are quite frightened of me, even though I always offer my hand in friendship,” he said, studying her small hand on top of his.

“Your hands are warm, sire, your spirit is calming. You are a good king,” she said candidly.

Tiva looked to them confused. She pulled her hands back and took a step away from the king, her markings turning pink. Kevler noticed and immediately knelt down beside her.

The king looked to Kevler. “She is in tune with her empathic senses and her markings have begun to react already?”

“I would expect nothing less from the Boon Family.” He nodded and clasped Kevler on the shoulder. The king turned to Tiva and took her hand again. “You are a very special child. Study well and listen to your elders.”

“As you grow, you will come to learn, young Tiva, that even I can be easy-spirited in private, but you are still confused, speak of what you feel.”

“Father called you by your birth name,” she said, studying him. She was sensing more from him than she understood. His jade eyes pierced through her in a wave of familiarity and his touch was comforting not intimidating as her cousins had told her. The king’s short black hair sparked with flecks of silver when he ran his hands over his head. The hair hid his moon markings. Tiva found this curious as she believed the crescent moon markings of her people were beautiful and something one should display with pride.

“Your father and I have been friends for many, many cycles. He is as close to me as a brother of my own blood,” he said, his complete attention on her, “you will learn when you can be informal. Guardians must always balance duty with pleasure.”

“So, am I to begin my training to prepare for the induction?” Tiva grinned at her father and the king.

“Yes, Tiva Boon, you are to begin your training.” King Delos deepened his voice sounding more official. “Five cycles from this day, should you pass all your schooling, you will be inducted into guardianship training.”

“Sire…” Tiva looked up to him once more.

“I wish to be an elite guardian,” she said.

Both Kevler and the king paused for a moment.

“I have told her we could discuss that, sire. Young Tiva here needs to learn patience,” he said.

“Have you not told her?” Harer asked.

“Told me what? Speak of what you hide,” Tiva said.

Kevler knelt down in front of her.“I wanted to wait until you were older so that you may understand, but there has never been a female elite guardian before.”

“Then I will be the first,” she said forthrightly.

“It is not so simple, dearest one.” He stroked her hand. “Tradition has always been such that women cannot hold the position of a level one guardianship.”

“Can the tradition be changed?”

“Our king, he makes the rules of our land, he can change them,” she said, and looked to King Delos and stared into his eyes. Kevler turned to the king perplexed, as if looking for help to explain the reasoning.

“Traditions are hard to break, Tiva, but we shall see where your path leads you. You may be the very one to bend the rules.”