My first reading love was mystery and suspense books. I seem to be writing more SciFi these days, but they usually involve some type of mystery which always brings the suspense along with it! The first story in this anthology came to me in a dream! Honest! It turned into a bigger story once I started writing it. Go figure. 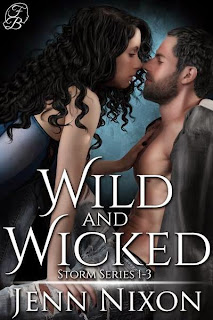 Blurbs and Excerpt below! Enjoy!!


Wild & Wicked
Veronica Chance’s sister has gone missing. In order to find Valerie, “Roni Starr” takes a waitressing job at Foxxes Gentlemen’s Club, the last place her sister worked, to search for clues. First day on the job, the club owner makes her give a lap dance to his VIP guest, former detective,Mason Storm.
Chance of a Storm (Book 2)
Mason Storm waited three months to hear from Veronica Chance after she walked out of his life. Instead her sister calls, begging him to come to California. After learning Veronica was kidnapped and her mother’s still missing, Mason joins the investigation while trying to figure out where he stands in Veronica’s eyes.
Trust Me, Tell Me (Book 3)
Mason Storm is set to marry Veronica Chance in seven days. When he receives a mysterious text message he immediately packs and leaves without saying a word to anyone. Veronica, however, is determined to help despite his claims of being the only one to make things right. As the situation intensifies, Mason is captured and Veronica holds the key to his release. Will she make it there in time to save him and their wedding or will everything fall apart?

“I’m sorry, didn’t mean to get busted…you don’t have to do this," Mason said.

“He’s probably going to watch,” Starr replied, eyes roving to the spots Karl had surveillance. Now why would a waitress know where the cameras were? “And it’s my first day.” She stepped close, drawing his attention. Long shapely legs, covered to the knees in leather, straddled his thigh. Her hips and waist were within reach, and her full bust directly eye level.

She swayed back and forth, stunningly hypnotic.

When she moistened her lips and spun around giving him a rear view, the blood rushed from Mason’s brain. Starr bent down and pressed her ass against his thighs, his entire body flashed with heat. She grinded in a circular motion, awakening and enlarging his cock surprisingly fast. Spinning again, she dropped to his lap, put her hands on his shoulders, and stared down at him.

With her face clear, he tried to remember where he’d seen her.

She gyrated, eyes seductively peering down. He fought the strain in his jeans with each movement, though she made it impossible. She was hotter than hell during a heat wave. Starr lifted one leg, straddled a single thigh and shook her hips again. The woman bit her bottom lip. So naughty. So his type, he loved it.

Then an image of her with red hair flashed in his mind. She’d been in the club, disguised, sitting alone at the bar, drinking here yesterday. He glanced up at her, knew he was right.