A couple of years ago Starz had this fantastic program called The Chair where they had two directors make two different films from the same script. The show itself was fascinating to a Movie/TV fan like myself. I thought I had a decent grasp on what goes on behind the scenes, boy was I wrong. I came away from the show with a much better idea what the cast, crew, and production staff go through to make a movie or TV show on a daily basis. WOW!

After the show was over, fans were able to watch both movies and fill out a survey about the movies. I watched both, did the survey, and reviewed both on Amazon.

Not Cool was a raunchy Teen driven comedy that I watched thinking I’d hate it. This was my review:

I'd really like to give it 3.5. I binged watched the first five episodes of The Chair, the reality show contest on Starz, from where the movies originated. I was sure I wasn't going to like Shane's movie with all the crude and gross jokes scattered throughout the movie, (a big difference from the writer's original script) but then something changed. They started to show the more emotional scenes of the film and the internal growth of Shane as a director. I enjoyed watching Shane's process and how he interacted with the cast and crew. Every single scene they showed in The Chair is exactly how Shane saw it in his head and presented it to the audience. I was very impressed. Shane as an actor found his footing halfway through the movie and really came into his own opposite the rest of the cast, equally impressive in their own ways. While I didn't like all the over the top elements and some of the nasty humor, it's probably because I'm a bit older now. Had I been in my twenties, I would have appreciated it more. However, the movie as a whole made me laugh out loud several times, and the end was very touching, realistic, and well done. Personal preference, I would have liked Joel to get the girl of his dreams, but I'm sure he'll be fine. :-) Congrats to Shane and everyone involved, good luck!

Hollidaysburg was a visually stunning coming of age movie that I expected to be a bit better than it was. This was my review:

Having watched Not Cool first and being very surprised by it, I feel a bit sad that I didn't like this one as much. It was beautifully shot, Anna captured the amazing landscapes and cityscapes of Pittsburgh brilliantly, which ultimately made the movie more enjoyable for me. The city itself feels like a character in the movie, which I thought was wonderful. However, I didn't connect with Tori and Scott in this version as much as in Not Cool, but the supporting actors and especially the two playing Heather and Will are impressive on their own and worth watching the movie for. I enjoyed all their scenes together. Congrats to Anna and her team! Good luck 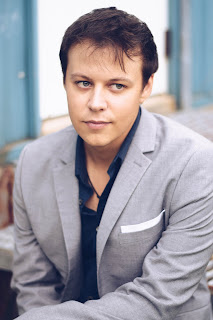 Out of all of these actors and directors, one person stood out to me, Tristan Erwin. Yeah, okay, he’s cute, but aside from the one other actor I had known of in Hollidaysburg, Tristan was the best character in both movies for me. So, what did I do? I found him on Twitter and became an online “friend-fan” – YES it’s a real thing!

As an author with a small press publisher, many consider me an “indie-artist” so I love finding other indie-artists in the same situation be it writing, acting, dancing, painting/drawing, directing…you get the idea. I think it’s very important to keep the arts going and I like to help support and promote indie artists whenever I can.

Tristan Erwin was kind enough to stop by for a for a quick Q&A!


Let's start off with an easy one. What’s your favorite Book genre to read?

Well, my absolute favorite genre is non-fiction. Boring I know, but I love my history books. I love reading of the fantastical tales that actually happened. In terms of my favorite genre of novel that would most definitely have to be historical fantasy.

What’s your favorite role you’ve had thus far?
That is a great question. I think I’m probably best known for playing the brooding young man in coming of age dramas. I’ve certainly had enough turns doing it, and it’s something I enjoy. However, I find myself most wanting to do action movies. Having done a few I’ve gotten a taste for the physical style of acting needed to do those type of pictures, and I’d like to keep returning to that type of character until I feel I’ve done it just right. I enjoy playing a character type until I feel I’ve mastered it, and then I’m ready to move on to something new.

Dream Role?
I’d love to play a knight in a medieval movie, I think that is the ultimate dream role for me. I’ve always been such a fan of that period of history.

When did you first know you wanted to act and become involved in the entertainment industry?
It was my sister who first got me interested in film, probably around 2008. She conscripted me into being an actor in some videos for her high school film class. I got hooked. I loved the art of it, but most of all I had fun at it and it was something I realized I had some skill at it so I thought why not pursue it?

I was a big fan of The Chair – Tell us a little bit about that experience and what you learned during the taping of the show and movie.
That’s a great question, I think because I was an actor on the film and I took my part so seriously I didn’t pay much attention to what the producers and directors were up to. I checked on Anna Martemucci every now and then to make sure she was doing alright and handling the stress. But for the most part, I was focused on myself and my character. I really liked Anna as a person so I wanted to go in there and really light it up so she could win the contest.

I have to ask, did you get to meet Zachary Quinto? He seems like a great guy!
I did! He was the first celebrity I met. And it was a rather strange occurrence. I met Zach at the red carpet in New York. They were taking pictures and Zach walked in and put his arm around me as the camera’s flashed. I didn’t actually get to speak to him until the after party. Trust me nothing is more sobering and surreal as meeting your first celebrity and having them introduce themselves to you and saying what a big fan of your work they are. He is an incredibly nice guy, I don’t think I’ve ever had somebody that renowned appreciate my work like that before so it was very humbling. All I remember of our 20 minute conversation was me saying thank you, thank you, thank you over and over again. I was so nervous.

I see on your IMDB page that you have a few other projects coming up. What can you tell us about Endeavor and The Deadliest Gun?
Endeavor is a maritime adventure/romance film I’m the star of along with a very talented actress named Alexa McConville. It’s relatively large in scale, I believe it took around 4 years to film the movie. Nothing is more relaxing than being at sea on a sunny day in calm waters, and nothing is more merciless than the pounding of the waves when nature decides to turn on you. It doesn’t have a release date as of yet, but hopefully we will see something of it soon. It’s definitely a unique entry into the world of film, and I know I’m personally very excited to see the movie.

The Deadliest Gun is a western film in which I have a small part in, I’ll be playing a Union bounty hunter in the film. I should also mention that I’ve acquired the rights to some movies I starred in a couple years ago that have had trouble getting out the door and being released.

The hope being that my little production company Absalon Films will be able to get these movies released before years end. The first film ’Together Alone’ is about an estranged couple trying to rekindle the flame. Starring myself and Chelsea Skalski, it will release on December 1st.

The second film ’Tick’ follows a woman named Lindsey who is struggling with the effects of a recurring nightmare. ‘Tick’ stars Sara Bakay, myself and Silvio Wolf Busch. It will be released on January 3rd, both films were directed by Ryan Droege and will be released on VOD and be available for streaming and digital download via Reelhouse.org

Other than acting, what has been your favorite process of making a short or a movie and which would you like to do more of in the future?
I think it’s all about story. I love writing an original story, and then seeing it come to life on film. Nothing is more gratifying than when you get it right and what you wrote comes across on screen the way you want it to. Ideally I’d like to continue to write and produce my own works, but obviously acting in a film is much easier than making one so I imagine the bulk of my future work will continue to be as an actor.

Thanks so much for stopping by Tristan, anything else you’d like to say to your fans out there?
Yes an absolutely heartfelt and sincere thank you to everyone out there who has appreciated my work and who has encouraged me to keep going forward. You are one of the most important parts of any movie I make, for after all what is the point of making a movie if no one ever sees it? So thank you for watching and thank you for the continued support!

As for me, it will be useful for you to learn more about passing exams. On https://pro-essay-writer.com/blog/exams-can-be-just-exams-and-not-a-nightmare you can read more about it