Answers may be found in the desert, if the right questions are asked. 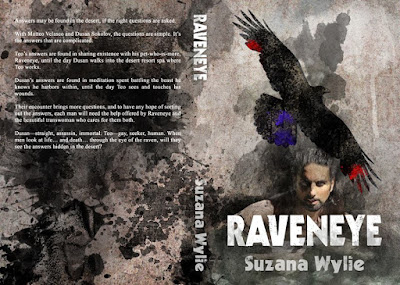 With Matteo Velasco and Dusan Sokolov, the questions are simple. It’s the answers that are complicated.

Teo’s answers are found in sharing existence with his pet-who-is-more, Raveneye, until the day Dusan walks into the desert resort spa where Teo works.

Dusan’s answers are found in meditation spent battling the beast he knows he harbors within, until the day Teo sees and touches his wounds.

Their encounter brings more questions, and to have any hope of sorting out the answers, each man will need the help offered by Raveneye and the beautiful transwoman who cares for them both.

Dusan—straight, assassin, immortal. Teo—gay, seeker, human. When men look at life… and death… through the eye of the raven, will they see the answers hidden in the desert?

“Are you going to give, or do I need to pour some serious tequila down your throat?”
Teo looked up from his computer station in the spa’s reception area. “What are you talking about, Edie?”
“You have circles under your eyes. You don’t always hear the first time you’re spoken to. You left the door open during that massage this morning. And honey, he wasn’t at all cute, so I didn’t want to see what I saw in there.” She raised a brow. “Stand up.”
She looked him over, then signaled for him to turn. “You’ve lost weight. Are you eating? Strike that. Are you eating right?”
“I’m fine.” Teo sat, turning back to the computer.
“You are not fine. We’ve known each other how many years now? Five? More than that.”
“Seven.”
“OK, seven. You aren’t fine and you know it.” She propped against his desk and tapped her fingernail on her teeth. “Something’s been wrong with you for a couple of weeks now.” She glanced around and went on in a lower voice, “Have you been out in the desert every night? Are you tripping every night now?”
Teo glared at her. “You shouldn’t mention that here!”
Edie raised her hands in placation, and said, “Okay, okay, calm down. You’re right, and I’m sorry. But I care, Teo. Something is wrong and I care.”
“I know.”
“You know I don’t gossip. Well, I do, but only about the unimportant things like shoes and who’s dating who in Hollywood and shit. Not about people I care about.”
“Yeah. Thanks.” Teo stared at his computer screen for a moment, then turned back to her. “Are you saying that there’s gossip going around?”
Edie discovered a piece of lint on her skirt. “Why would you think that?”
“Damn. What are they saying, Edie?”
“If you don’t want to talk about it at work, don’t you think you’d better quit talking about it at work?”
After a long moment, Teo sighed. “Drinks, after work?”
“Sure. Your place?”
“The bar. No liquor at the cottage.”
“Well, there’s your problem, dude. You need to get drunk.” She studied him again. “And laid, I’d say.”
When he glared again, she laughed. “I know. I’m not your type. Just saying you should find someone and do ‘em.”
“It doesn’t work that way for me, Edie, and you know it.”
“Maybe it’s time to give it a try, just once. We’ll check Grindr later.”
“Edie, this is a gay resort. I don’t need Grindr. All I have to do is smile.”

Suzana Wylie is the non-so-pseudo pseudonym of Susan Wylie Wilson. Suzana is a Southern girl who’s proud to be far less Southern than most. She credits the two years spent in extreme northern Maine and the ten years in western New York with knocking off the remnants of Southern from her. Though she does still eat grits. She’s been writing since she figured out which end of the pencil to lick, but only published in novel form in the last few years. Since she spent most of her early life, up through college at least, knowing that she didn’t fit in with the girls and enjoying hanging out with the boys better (which is still true, but no longer the source of angst), she’s always had a fascination for M/M relationships and the dynamic, so different from M/F relationships. Though there are women in her books, they’re not the love interest, no matter how great a role they may play in the story. When Suzana isn’t writing or reading, she’s likely to be coloring or drawing, or blending her two personalities by knitting while yelling at the football game on TV.

Thank you for this interview. Do not forget to post this info!