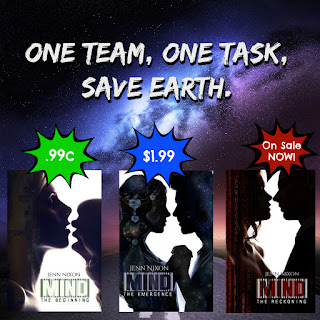 Fan Favorite, Baldwin Bates, finally gets his own story and HEA in book three MIND: The Reckoning.

To celebrate the new release, books 1 & 2 are both on sale for the rest of the week! You can find all three books here: www.amazon.com/Jenn-Nixon/e/B002BLNBBQ MIND: The Beginning .99c, MIND: The Emergence $1.99


MIND: The Reckoning
Baldwin Bates has only wanted one thing since joining MIND, to take care of his friends and keep them all safe. While the Meta-Alien Investigation and Neutralization Department is busy monitoring an emergence of human psychic and alien activity, Bates takes his first solo assignment searching for a woman who claims to see the future, only to botch it up and let her get away.

After helping to destroy an alien device called the Transcender, Lexa Quinn wakes from a two-week coma a very different person than she was before. While her abilities grow stronger, her feelings for Bates begin to interfere with the MIND team's mission, putting everyone at risk. Secrets from her past threaten the present and future, forcing Lexa to decide who she is and where she belongs.

When a powerful, ancient enemy lays claim to the Earth and brings his judgment upon the population, Bates, Lexa, and the entire MIND team must do whatever it takes to save the human race before the reckoning is complete.

As Bates bypassed the crafters and artists, the scent of Asian BBQ wafted through the air. He grumbled along with his stomach and hoped a few of them stuck around so he could pick something up on his way out.

"How’s it going?" Dina Ranger asked via his earcomm, jolting him.

"Shit! Forgot I had this bloody thing in," he replied, taking a breath and shutting his eyes for a second.

"Have to get used to it if you want to be in the field...alone." 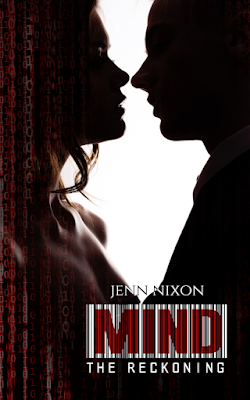 "Unlike your brother, I need some me time, Sherlock." This time, he chuckled when he felt her brush his mind with calming thoughts. "How’s Lexa? Any change?"

"Me either," he said with a sigh, quickly putting it out of his mind to maintain his focus. "I just got to the park. I’ll check in before I leave."

"Okay. And whatever has you so hungry bring some back. Talk to ya."

Shaking his head, Bates waited for the static of the comm to fade before pushing farther into the park, eyeing the tables and tents, but mostly their occupants, searching for a face. Miss Takashi had a pretty face, although older now, since the photo from the collective Meta-alien Investigation and Neutralization Department database was almost one hundred years old.

When he neared the end of the first row of vendor tents, he took in the sight of the city across the river, and then found the second and final row of vendors left to search.
He politely declined several offers to purchase various items like candles and potholders, wondering why his ‘blah face’—a term his new friend Kim called his usual stern façade—wasn’t working.

Toward the middle of the second row, Bates slowed, eyeing a colorful booth, shrouded in light purple curtains, and a sign that screamed for attention. When a face-painted toddler, followed by a frantic parent, came running out of the booth, he barely sidestepped out of the way. The parent offered Bates a weary shrug. He nodded politely and carried onward, finally seeing a sign for "Madam Takashi" two booths down.