Beauty and the Beast Movie Adventure with the Bestie

Well, I saw it. As of right now, they're saying Beauty made 160 million over the weekend. It's 7pm as I write this. They'll probably make another 10 million before midnight.

So I've been DYING to see this movie. Bestie and I decide to go at 12pm Sunday. We get to the theater. Two signs on the window. Beauty 3D sold out until 1pm. Beauty 2D sold out until 6! This has never happened at this theater opening weekend in the six years I've lived here.

I freak out. We go back to the car and fandango on Bestie's phone. Signal isn't working. We decide to go to another theater and start driving. I get on my phone and fandango. Get the tickets. They're $15! Normally the matinee by me is 9. Meh. I'm seeing this movie and buy the tickets.

We get to the theater and I warn Bestie I will probably be crying throughout this whole movie. I proceed to explain that I literally cried through the whole movie when I bought it on DVD after it came out of the Disney Vault.

As I'm looking up at the time screen I realize something. We're in an IMAX theater. I paid $15 for matinee. I freak out. Bestie...we're seeing this in IMAX. OMG.

After twenty minutes of trailers, really Disney?, the movie starts, the castle appears and the music begins. I start tearing up. It barely stopped for two hours. I shit you not.

If I wasn't smiling at the amazing...EVERYTHING, I was crying and lipsyncing and tapping my foot or laughing.

One tiny, minor moment during the wolf fight was missing for me... 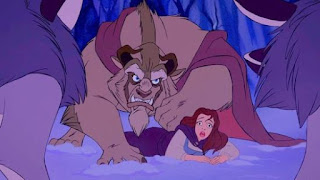 ...and I could have done without Beast's solo toward the end, but other than that? It was perfect. <3
Posted by Jenn Nixon

Email ThisBlogThis!Share to TwitterShare to FacebookShare to Pinterest
Labels: Beauty and the Beast

This is one of the best movie of my childhood . Now I can only rely on https://dissertation-center.co.uk/dissertation-proofreading-services service.