I'll have to add Supergirl to my Summer TV Recap blog along with The 100 and probably Legion. I still haven't started it, I want to binge it. Maybe this weekend. :-)

I'm going to keep the same format: Favorite Character(s), Favorite/Standout Moment, and thoughts for next season (if there is one).

Once Upon A Time
Emma & Regina (prior to the last season)
I really tried to watch this season with grown-up Henry and Fake Hook, just couldn't get into it. I did come back for the last episode and was happy to see the original cast. And funnily enough, my favorite part was the little red ball thingy on the end of Hook's hook so he wouldn't hurt the baby. I thought the end of the previous season was great, they should have tied it up then.

Agents of SHIELD
Coulson, always.
This cast is one of my favorite ensembles on TV, I'm so glad they're getting another season, even if it is short. I'm going to rewatch this season soon, I love all the timey wimey stuff. It's hard to pick any one moment from this season because there were many and it was such a great ending, but I think the future Fitz reveal was my favorite.

The Flash
Barry, Joe & DeVoe
I'm going to miss the actor who played DeVoe, he was fantastic. I honestly hate saying this but I thought the finale was a little flat. I think I rolled my eyes twice, which isn't something that I normally do. I'm all about suspending disbelief to watch my comic book or superhero shows. I'm more excited to see the new version of Harrison Wells than anything else. He's a gem.

Krypton
Seg-El, Lyta-Zod, Nyssa-Vex
I wasn't going to watch this show. I mean, we already know Krypton bites the big one and if you've watched any of the animated series or movies, you know what happened to Kandor. My BFF told me to watch it after watching the pilot. I was like, really? For real? I mean Syfy is hit or miss for me. They have a few shows I've loved (Defiance, Killjoys, Lost Girl) but more misses, so I wasn't expecting to like this show. Boy was I wrong. The world building is fantastic, Religion, Military, and Class are all explored. Throw in a little time travel and bam, we've got an Earth 2 style story that you probably couldn't predict even if you tried. I'm ready for season 2 already! 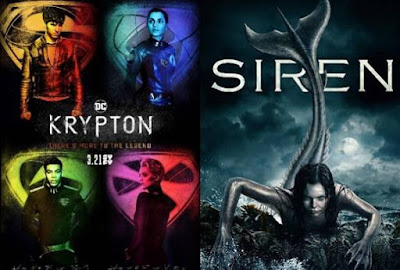 Siren
Ben & Maddie
This is another show I didn't intend on watching. I was bored one weekend and two episodes were On Demand. I figured, why not. I was pleasantly surprised that it wasn't a Mermaid Romance story, which is kinda what I was expecting. They broke every trope I had in my head by having the main character already involved with someone. The mermaid is not like Ariel, at all, and I like how they blended the Siren & Mermaid myths to create a newish take on the mystical beings. This one is also getting a season 2. Yay!!

Did you watch any of these? What are your faves?

You can always read information from https://proeditingproofreading.com/blog/expository-writing if you want to know more about expository writing. It will help you to achieve success