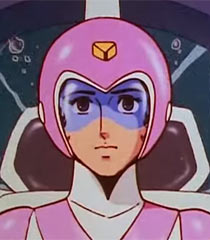 I will be 45 years old this April, which means I was 10 when the "Original" Voltron showed up on my TV.  If we're getting technical GoLion was the original from Japan and Voltron was a cut-up, redubbed, piece of work that probably should not have been as popular as it was. I don't remember how I got started watching it or why I loved it so much, but what I do remember most was there was a princess fighting alongside boys in a huge freaking robot and saving the day.

The tomboy in me was hooked.

Going back now, original Voltron is painful to watch. I've tried. Multiple times. I just...can't do it. When I read the recaps for both of the shows and other fun facts I had found online a bunch of years ago, I knew a reboot of this show was needed. Honestly, I was hoping for a live action movie like they did for Transformers, but they went with an animated series and I know they made the right decision.

I've been a Fangirl (in general) for a very long time. To me, Fangirls and Fanboys are just an extra layer of being a fan, the type who might draw a picture, write a fan-fiction, go to a convention or join online groups to find other people who love something as much as you do. I have many, many, many fandoms. Voltron is one of my first ones to really stand the test of time (aside from Superman and Batman of course).

One of the things I used to love to do was find people on Social Media to talk about the fandoms I love. When I went to look for Voltron fans, I was honestly shocked at how nasty and angry some of them were. Of course, some were trolls looking for a fight, but most were legit people. Now, don't get me wrong, as a fan, I've complained many times about things I didn't necessarily like or agree with on a variety of shows going back decades. What I didn't do, however, is attack other fans or anyone who worked on the show like I've been seeing constantly for the past three or four years.

I won't assume that all of these toxic fans are young and don't understand how the world actually works when it comes to creating entertainment content for the masses, but I'm guessing many of them are younger than I am. 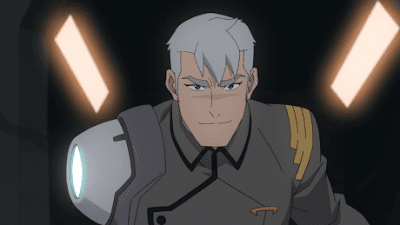 I wrote an earlier blog about the whole Shrio and 'Shipping fiasco from Season 7 and it didn't get any better, toxic fanwise, for Season 8.

I won't begrudge anyone their feeling or annoyances, however, I will give you my opinion as someone who has waited over 30 years to see a cohesive reboot of my beloved Voltron.

When we start the show, way back in Season 1, we meet our main cast who tends to fulfill the Team Trope quota. We've got the fighter in Shiro, the rogue in Keith, the heart in Hunk, brain in Pidge, the comic relief in Lance and Coran and the healer in Allura. This is an easy (and smart) way to set up a base set of characters. I found the humor a little young for me, but it didn't detract from the overall story. I knew that this show was targeted to young kids...not even teens, so I took that into account. And to be honest the animation is so breathtaking it could have been targeted for toddlers and I'd still watch it.

By the time we get to the end of the sixth season, the majority of our characters have grown into the people that they need to be to fight the big bads of season 7 and 8. They've all gone through trauma, they've all fought, they've argued, they've tried to do things on their own, they've stumbled and lost, but they kept striving to do better, be better, and be the heroes the universe needed them to be.

Not only did the writers make these characters feel real, they enriched the story with fantastic callbacks to the original (SVEN!) without compromising the story. Their biggest problem, in my opinion, was listening to the fans. I'm not sure how much pressure Dreamworks put on the writers of Voltron after seeing the fan reactions, but I know they had an impact and I know it changed the original story they were going to tell.

Despite all that, and after watching the last two season three times, I think it was the perfect ending to the show and I  wouldn't have written it much differently. I would have cut out that epilogue and got rid of Day 47 for more time with our team. And I would have hooked Shiro up with one of the Alteans we met from the colony.

I think people wanted more character development in the last two seasons with regards to love interests. I didn't mind that there wasn't because it was more about the story toward the end while the characters were the focus in the beginning.

But I digress and move into real spoiler territory now to talk about Allura. Her ending was probably the most shocking to me (and Twitter), though I should have seen it coming with all the foreshadowing they did. It's subtle enough that I missed it the first time around. I was honestly in tears sobbing. My brother had to ask me what was wrong. LOL 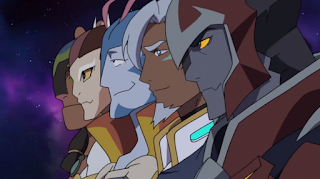 I wasn't angry, but I understood why others might have been. After my third rewatch, I realized it really was the perfect end for her. She was in cryo-sleep for 10,000 years. Her entire family and planet were gone. She was a woman out of time, the only one (along with Coran) who knew the truth of the quintessence and power struggle between Alfor and Zarkon. (I'm totally down for a prequel with the OG paladins!!) She saved the entire universe with her sacrifice, yes, but she also rid the universe of the destructive power of quintessence by closing all the rifts and fixing all the realities. Perfect ending for a scifi story about humans powering a giant robot.

Oh, I know many, many fans disagree with me, and I've been smart enough NOT to comment negatively or respond to trolls or toxic fans. I refuse to let them ruin this show for me.

Part of me will always wonder what the writers and team originally wanted to do, but I'm grateful we got this version in the first place, so, you won't see me complaining much.

Did you watch Voltron? What did you think? I'd love to hear your thoughts!
Posted by Jenn Nixon

I think that on https://dissertationowl.com/blog/dissertation-proposal-outline you can get really useful tips about writing Dissertation Outline. It's quite important to know