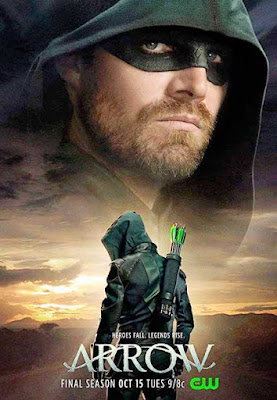 As some of you may know, I love superheroes. My fascination with them started way back in the late
70s when shows like The Incredible Hulk and Batman were playing on my TV. Then there was this amazing movie called Superman which showed up on this awesome new cable channel called Home Box Office. You could watch THE MOVIES in your home without commercials!

Trust me, to an 8-year-old, watching a real movie at home was the most exciting thing in the world in the 1980s.

Something even more exciting happened in the early 1990s, they made an X-Men cartoon show just for kids and teens! Not only was it a great show, but there were several female superheroes mixed in with the males, which was something I was very excited to see having been a fan of Batgirl and her awesome purple motorcycle. (Hmm, maybe that's why it became my favorite color?)

Anyway, I missed a few fantastic superhero shows in the mid to late 90s - most of which I've since seen every episode of, yet, I never missed any of the superhero movies.

When Smallville started on the WB in 2001, I wasn't very interested. My BFF was already watching it, and I think he had it on one day while I was visiting. Imagine my shock when John Schnieder of Dukes of Hazzard fame popped up on the screen as Jonathan (Papa) Kent. I'm certain I wasn't the only one who started watching that show because of him, and I'm glad I did. Smallville was a fun, new take on The Man of Steel, and I am a sucker for an origin story, even if it lasts 10 seasons.

So many awesome characters showed up on that show. The Flash, Aquaman, Supergirl, and even The Green Arrow, who I didn't know much about. If you're a fan of This is Us, you probably know that cute Justin Hartley played Oliver Queen in Smallville. I thought he was great. Totally fell in love with his character.

When they announced that Smallville was ending, and there was mention of a new superhero show in the works, many of us fans thought that The Green Arrow with Hartley was a given.

Well, to say I was shocked to learn that wasn't happening was an understatement. I was mad. Hartley was a great Green Arrow. He had the look, the personality, and had already gained a huge fanbase. Still, I was mad. I didn't want a different actor to play Oliver.

Flash-forward to the Series Premier. Begrudgingly, I recorded the episode, since I had become a big fan of many shows on The CW, to at least give a fair assessment of why I was going to hate this show.

It took all of one minute and thirty-one seconds to prove me wrong.

From the opening scene, I was hooked. Damn it! I was still mad.

By the end of the pilot, I was all in.

And now, eight years later, it's over and I already miss it.

The Arrowverse as they now call it, has become one of my favorite things ever on TV. Don't get me wrong, I love all the Marvel movies too, but I'm first and foremost a DC Girl. And while I'm very sad that I won't have the Arrow crew on my TV every week, I have the rest of the shows, and the hope that Stephen Amell will return one day.

Do you watch the Arrowverse? What did you think of Crisis? Which is your favorite show now?