Time really does fly the older you get, huh?

All righty, here's part 3, as promised.

I know I'm missing some shows and I know I haven't finished all the mid-season finales yet, but I think I have enough to go with. :-) 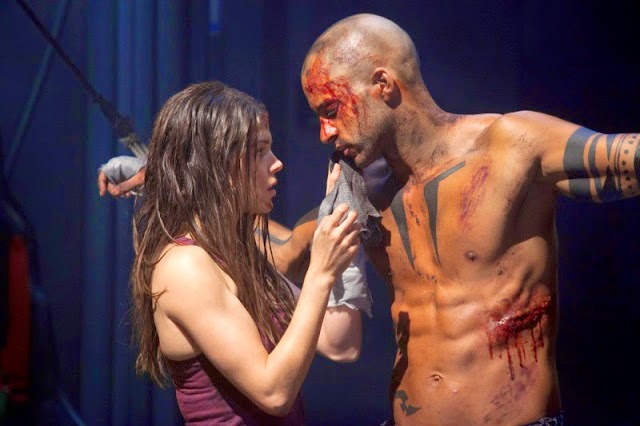 I'm really getting into the whole YA thing, though I can do without the love triangles. They're mostly annoying. So, I'm happy that it's no longer an issues on The 100. They got rid of the first love triangle in season one and while the second love triangle was interesting and felt more organic, I'm glad it's over, too. Now Clarke can get with Bellamy. Hey, I didn't say I don't want a little romance in my TV shows, I'm just over the love triangles. :-) Anyway, this is still one of my favorite new shows to
make it to season 2. I know it's not following the books as closely, which is probably a good thing considering the reviews I've read, but the characters on this show are amazing - from the parents to the kids to the creepy Mount Weather people and the Grounders. I can only imagine where this show is going but it has tremendous potential. It doesn't hurt there are lots of hot people either. <3 Lincoln!

Once Upon A Time

I hated the Snow Queen's story. They didn't do it justice at all. I would have rather seen more flashbacks with her and Emma and some other reason for the SQ to be all evil and whatnot. I'm also tired of the writers looping Regina about around again and again for no good reason. I don't have a very good feeling about the new Queens of Evil story line either, but...I'll stick around a bit longer and see what happens, but it may be my last season.

I'll never give up on the Winchesters. I'm not sure how I feel about this season, so far, but the addition of Crowley has been awesome...up until they introduced his mother. The few scenes with them have been funny, but I hope she doesn't stick around long. The last episode with Jimmy's daughter was better than I expected. It's nice how the writers bring back characters and actors from the earlier seasons and keep their stories intertwined with what Sam and Dean are dealing with currently.

I will be honest, I fast forwarded through a bunch of the last several episodes but caught the finale which went down rather well. I still enjoy watching this show because it is a study in human behavior and sometimes it helps me flesh out a character - believe it or not. :-)

I still don't know why this show was canceled. I don't get all the Sorkin hate. I don't see his female characters as anything but female characters. I've know girls like each and every one of the characters portrayed on that show. Some are jerks. Some are smart. Some are girlie. Some are weak. Some are powerful. Some are strong. I actually liked all the Sorkin-logues. Above all else, I loved watching the news teams gather the stories and sources and despite the fact that it was all old news that happened months ago, I was sitting at the edge of my couch, pulse racing as I watched many of the shows. It really sucks that it's over. I would have loved to see their take on recent events including the Sony Hack. Oh well.

So, what has been your favorite show so far this year? Do you enjoy these recaps? Should I keep doing them? :-P
Posted by Jenn Nixon