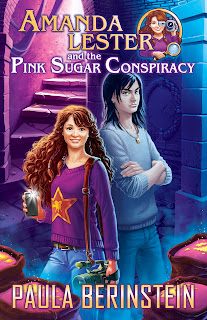 A reluctant detective, a criminal mastermind, and . . . sugar?

Amanda Lester wouldn’t be caught dead going into the family business. Her ancestor, Sherlock Holmes’s colleague Inspector G. Lestrade, is a twit. Nevertheless her parents refuse to see his flaws, and she’s going to a secret English school for the descendants of famous detectives whether she likes it or not.
When Amanda arrives at the dreaded school, she considers running away—until she and her new friends discover blood and weird pink substances in odd places. At first they’re not sure whether these seeming clues mean anything, but when Amanda’s father disappears and the cook is found dead with her head in a bag of sugar, they’re certain that crimes are taking place.
Now Amanda must embrace her destiny and uncover the truth. The only snag is that arch-villain Blixus Moriarty, a descendant of Holmes’s nemesis Professor James Moriarty, might be involved, and he doesn’t like nosy little girls interfering in his business.

He leaned forward. “I think there’s something weird going on here.”
“At the school?” said Amanda.
“Yes.”
“What kind of weird thing?” said Ivy.
“I’m not sure, but I think something is wrong,” said Simon.
“Something like what?” said Amanda, half dismissing the idea. Who knew if he was credible?
“I don’t like to be melodramatic, but I think I’ve been hearing things,” he said.
“Things?” said Amphora.
“Odd noises behind walls,” said Simon, motioning toward the right-hand hall wall with his head, then circling toward the left-hand one. The motion made him appear slightly spastic.
“You mean like mice?” said Amphora. “I don’t like mice.” She shuddered.
“No, he’s right,” said Ivy. “Not mice. People.”
“Yes, people,” said Simon, doing that heel-toe rocking thing again.
“Is that what it was?” said Amanda.
“What what was?” said Amphora.
“Ivy heard it. In the bathroom.” She jerked her head in the direction of the offending restroom, then caught herself. She hoped she didn’t look as dumb as Simon doing that.
“Like a scraping?” said Simon.
“Yes,” said Ivy. “And some thumping. No, Nigel. Not you.” The dog was wagging his tail excitedly for some reason only he knew.
“I didn’t hear any thumping,” said Amanda.
“Definitely thumping,” said Ivy, rubbing Nigel’s head.
“It’s probably nothing,” said Amphora. “We’re not used to the school. I’m sure there are all kinds of things they have to do that we don’t know anything about. Maintenance and stuff. Maybe those décor guys.”
“I don’t think so,” said Ivy.
“No, I don’t either,” said Simon. “I think it might be something we’re not supposed to know about, and I want to find out what it is.”
“But why do you think that?” said Amphora. “I think you’re overreacting.”
“I don’t think so,” said Simon.
“Why not?” said Amphora.
“Because I saw blood outside the east door.”

Newsletter (get a free short story when you sign up)

Author bio
Paula Berinstein is the former producer and host of the popular podcast The Writing Show. She lives in Los Angeles.